Not Your Usual Suspects – Termites vs. Flying Ants

Not Your Usual Suspects – Termites vs. Flying Ants

You wouldn’t mistake a mouse for a rat, a spider for an ant, or a centipede for a cockroach; but you would be forgiven for mistaking a termite for a. 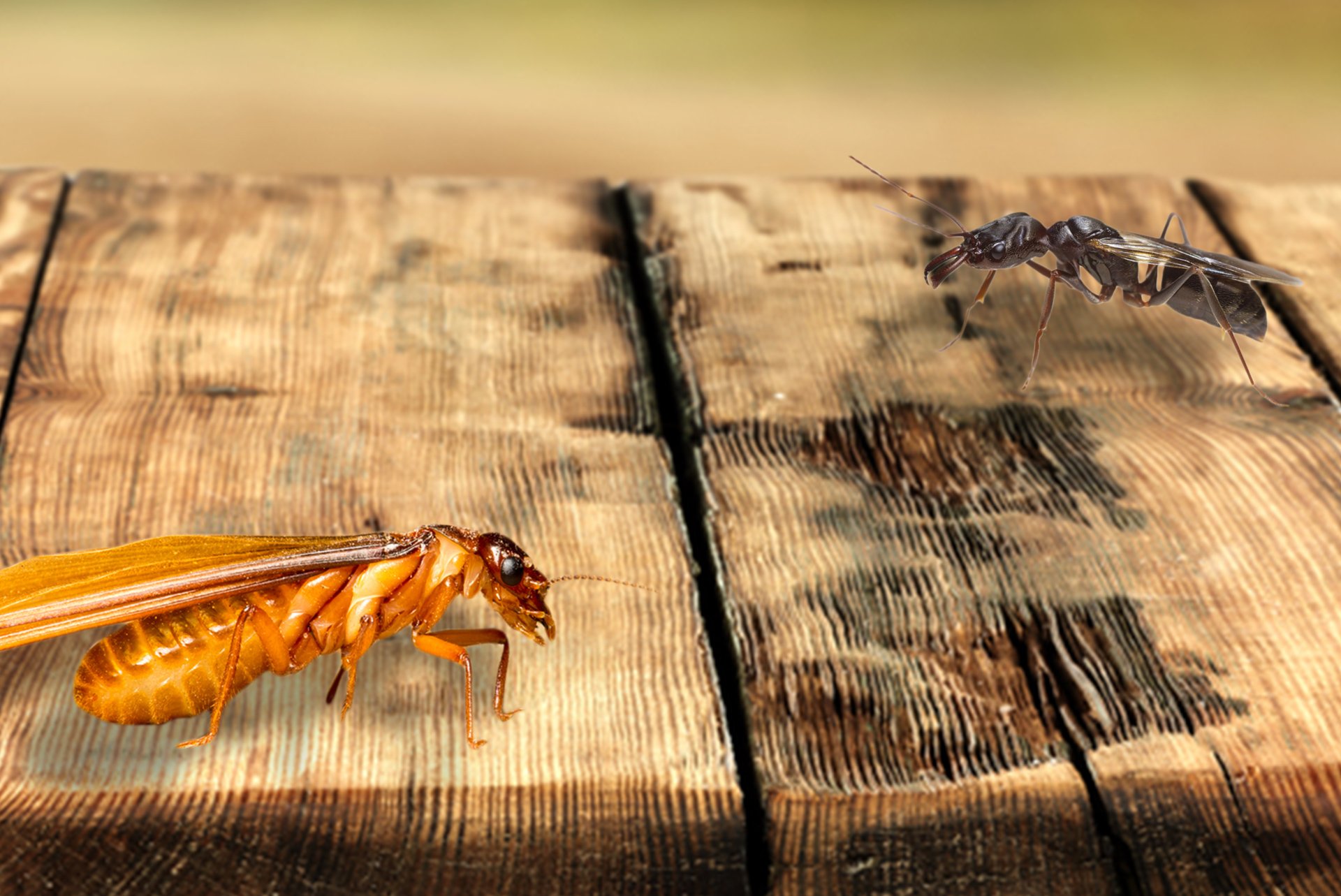 You wouldn’t mistake a mouse for a rat, a spider for an ant, or a centipede for a cockroach; but you would be forgiven for mistaking a termite for a flying ant; especially if that termite was one of the winged variety. In fact, many people mistake termites for flying ants. Winged termites, known as ‘swarmers’, can look like flying ants; often, a suspected problem with termites turns out to be a problem with carpenter ants or fire ants because they look so similar. It is crucial to know the differences between these two pests, as the methods used by your friendly neighbourhood pest control company will differ depending on whether you need your termites terminated or your (flying) ants annihilated. Here’s how to spot the differences between these two pests.

Upon closer inspection, the two perps have different body shapes. Termites have a straight waist while ants have a pinched waist. Termites have straight antennae while ants have bent antennae. Termite wings are the same length while ants have wings of different length. Also, crucially, flying ants don’t shed their wings, while termites do; so look for fallen wings in doorways or window sills. Yes, we know, most of us don’t walk around with a magnifying glass in our pockets, so even up close it can be hard to identify the culprit; try trapping one in a glass jar for a closer inspection.

In termites, the queen lays eggs that hatch into soldiers, workers, and swarmers (also known as alates). The job of the swarmers is to fly off and start their own colony. They often fly off during rainfall when the soil is most, making it easier for them to burrow down into the ground to start their new colony. After flight, their delicate wings fall off, they find a mate, and attempt to begin new colonies in the soil. Most swarmers die without ever having achieved their purpose, but their presence will present you with the warning signs of a colony in the area. Vacuum up these swarmers and call your local pest control company to locate and destroy their colony of origin.

On the other hand, flying ants are usually more of a nuisance than they are harmful to the structural integrity of your home. The majority of ants are wingless. However, at certain times of the year, swarms of flying ants become a familiar sight. All ant species live in colonies established by fertile females or queens. Ants swarm to mate, and then the males die, having done their duty, and the queens drop their wings to find a nesting site.

SCENE OF THE CRIME

Termites are the spies of the bug world; they’re sneaky and secretive. Identification is made even harder by the fact that termites can often remain hidden away in your home’s infrastructure for years without your knowledge. Therefore, the first indicator of a potential infestation is usually visible evidence of termite damage, such as spotted, discoloured, broken, or warped wood; or moist lines of mud streaking from the basement, garden, or garage.

A flying ant seen indoors during the summer may just mean that it flew in from outside, and in all likelihood, it will die before it nests. A flying ant or two isn’t a problem, but if they appear in greater numbers and more frequent, and if you find piles of sawdust-like material, then it is likely that a colony has already established themselves inside the home and your ant problem just went from an occasional nuisance to an infestation. A flying ant indoors in winter, for example, is more uncommon and could be a sign of an infestation somewhere inside the structure of your home.

There’s no question about it: both of these criminals pose a massive threat. While termites feed on wood, carpenter ants remove wood to build tunnels and expand their homes. Carpenter ants destroy property much quicker, but if a termite colony has chosen your property as its home, it’s likely the colony has been setting up home-base for far longer than you think. By the time most homeowners find evidence of a termite infestation, the structural damage has already been at stake. Finding a termite in your home means a nest is close by and likely under the house. Finding a flying ant in your home, on the other hand, does not signify an infestation. If you have doubt, then there is no doubt: Call a pest control company right away.

And look no further than BugMaster. For termites, flying ants, for all the bugs and rodents listed in the first sentence of this article, we are their worst nightmare.

That's because with us, the bug stops here. Call us today.

Our free guide is also a great place to start! We've created a handy resource for you to keep on hand, with simple tips and tricks to keep your home ant free!

Buzz Off Wasps!
Bird Feeders – That’s How You Get Rats
UNLEASHING PLATINUM: The next step in pest control.
Why are there ants in my house in the middle of winter?!
Attack of the Carpenter Ants!