Nature’s Jekyll and Hyde: The Benevolent Bee and the Wicked Wasp

Nature’s Jekyll and Hyde: The Benevolent Bee and the Wicked Wasp

Bees are great. Our world doesn’t work without bees. They pollinate flowers and crops, and about one mouthful in three in our diet directly or indirectly.

Posted 12 May at 02:44h in Wasps by BugMaster Pest Control 0 Comments
Share 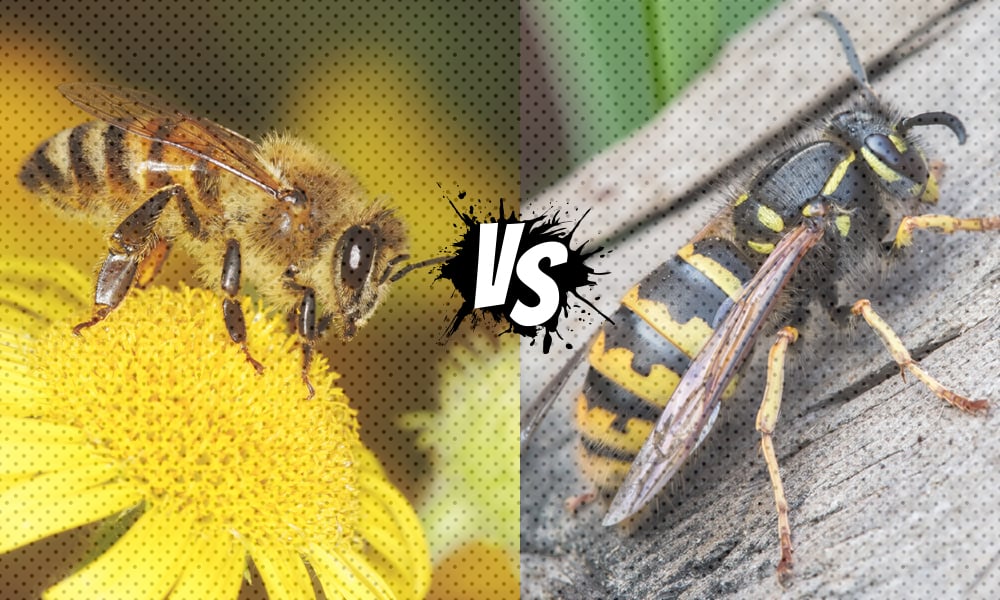 Bees are great. Our world doesn’t work without bees. They pollinate flowers and crops, and about one mouthful in three in our diet directly or indirectly benefits from honey bee pollination. Wasps, on the other hand, are just…jerks. Here's a handy diagram that succinctly provides the differences.

As a kid you learn that bees, particularly bumblebees, are nice: they pollinate flowers and plants. They’re hardworking happy insects content to be left alone to do their vital work. Wasps, however, are a different story. As a kid you learn that wasps are a pest - more aggressive and more likely to sting you. They hover around your food, and may even take a quick dip in your drink. You hear that buzzing sound and turn to identify the insect. If it’s a bee you’re relieved and content to let it buzz by; if it’s a wasp you try to swat the sucker.

Bees and wasps are often mistaken for one another because both share similar characteristics and both are capable of delivering painful stings to anyone who annoys or threatens them. But whereas bees - honey bees or bumble bees - can attack when provoked, they are by nature calm and collected; quite unlike their hot-tempered cousins the wasps, who are by nature more aggressive and more likely to sting. It's important you identify the differences between bees and wasps to calculate risk and decide whether to just relax and let the bees do their work or to call in your friendly neighbourhood pest control company to remove a wasp horde.

Bees gather pollen and nectar from flowers to use as food for their offspring. They are gentle by nature and will not eat human food. Wasps are predators and hunt for other insects or spiders, but some also visit flowers for nectar. Bees usually have very hairy bodies and pollen-collecting hairs on their legs or under their abdomen to help them accomplish this task. Wasps tend to have few to no hairs at all because they don’t intentionally collect pollen; they have narrower bodies with pinched waists. When in flight, bees' legs are usually hidden whereas wasps' legs hang down. Bumble bees are even more readily identifiable because of their round shape.

Wasps are more aggressive than bees; they are more likely to sting and can sting multiple times, whereas a honey bee (but not all bees) will die after it uses its sting. This built-in one-sting-and-you're-out mechanism no doubt contributes to a honey bee's more peaceful and less confrontational nature. Wasps are predators; bees are pollinators. Wasps will sting you as a matter of course; bees will only sting you as a last resort.

Wasps and bees lead different lifestyles. Wasp colonies tend to peak around 10,000 individuals with the Queen building the nest, while honey bee colonies can have populations of over 75,000 with worker bees creating and maintaining hives. Wasps hibernate; bees live off of stored food supplies. Wasps live in meadows, orchards, woodlands, and playgrounds. All wasps build nests, which is a paper-like in form and made from wood fibres that have been chewed into a pulp. Wasps build their nests in trees as well as manmade structures such as decks and porch overhangs. Bees can thrive in natural or domesticated environments, though they prefer to live in areas where flowering plants are abundant such as gardens, woodlands, and orchards. Bees build nests inside tree cavities and under edges of objects to hide themselves from predators.

Wasps aren't all bad. Virtually every pest insect (flies, spiders, caterpillars) on Earth is preyed upon by a wasp species, either for food or as a host for its parasitic larvae. But you never want to allow a wasp population to get out of hand, because after a while they might start to think they're in charge of your home. Wasps can be useful to us but now and again they need reminding who the alpha predator at the top of the food chain really is.

Bees are here, and they need to be here to stay. Wasps, on the other hand, can buzz off. And if they don’t take the hint then you know who to call…<cue drum roll>…BugMaster! Yes, that’s right, your friendly neighbourhood pest control company will wisp those wasps away lickety-split. Our technicians are trained to deal with all types of flying insects, as well as mitigate the risks of these insects to you and your family. Call us today to rid your life of any and all pest problems (Warning: in-laws don’t count; you have to deal with them on your own).

Buzz Off Wasps!
Kiss Your Nest Goodbye: Getting Rid of Wasps